What a bad start into the 2013 Bike season… Massive rainfalls and floods all over Europe. Where to go for riding? Well, we had a mission with ION bike to produce all the pictures for the 2014 bike brandbook. We had only two weeks time to get it done. The only place in Europe to go was Sicily. I have been there four times already to ride the trails around the Etna volcano. Its only a two hour flight from munich. Perfect. Almost – ION wants us to drive all the way down to be more flexible if weather changes. 1700km one way with our old VW van. Not a good idea, I thought. It would take us two days to get there and its a hell of a drive. Not to mention the risk with the old Van… but we had to do it. There was no other option. I started with Markus Greber a day earlier then the rest of the crew to take some first shots at Lake Garda. We stopped at our friends from Hotel Santoni in Torbole and told them about our mission to Sicily. They were laughing at us and made clear, that driving all the way down is not the smartest option and no Italian would do it. They all take the ferries! We never thought of this option before but it made sense. So we booked a cabin for the next day and told the rest of the crew that we meet at the harbor in Rome.

When we left Torbole Markus VW Syncro lost a lot of oil, made weird noises when changing gears. We were concerned if we would make it in time and every kilometer it got worse. Somehow we made it just in time to Civitavecchia. We met ION Teamrider Julia Hofmann, Max Schumann and Nicola Pescetto as well as our ION marketing manager Basti Dietz. When we told them about the problems we had with the Van it was Julia who was lying under the car the next second, checking for leaks and tasting the oil. Her analysis: the gearbox is loosing oil and spills it onto the clutch – thats why the gears jump out when we drive it with a lot of pressure… Okay… we thought…whatever… but, why the hell does this girl know that much about cars? Markus and I were like: „sure, thats what we thought as well“ to hide that we knew nothing. She told us that she restored an old VW Beetle and some old Landrovers lately. Her brother is a mechanic and so she learned everything from him over the years. She gave him a call to double check if we can continue our trip. We did continue and jumped onto the ferry which took us over night to Palermo.

Our first stop was Castelbuono, a little beautiful village surrounded by some mountains with many different singletracks to ride and shoot on. The days were long as always on trips like this: Get up at 4:30am, pack the cars, shuttle as far as possible, ride the rest and be on location when the first light hits the trail. We found some great trails to ride, but not to shoot on. We needed Trails with epic backdrop – not dark pics in the forest. So we moved location to a secret place for some real Big Mountain ridge lines. I could not believe my eyes when we arrived there. An endless playground with ridgelines and options for jumps like in Utah. Instantly I felt like the guys in „where the trail ends“ and I knew this is the place where we find the „moneyshots“ for our ION catalogue.

We started to hike up the hills and ride some first lines to get a feel for the new terrain. It was hard to remember the right rigde and line when you go fast. I paid the price with some hard crashes when i took the wrong one. Learning by doing, I guess… I was surprised how Julia surfed down all the lines with us – it was also for her the first time on terrain like this. She had so much fun riding there, that she could not imagine to get back to enduro-racing after this trip. Nicola Pescetto was in his element. He found a location for a massive jump to build. He worked hard to get it done and after two days work he went for it in perfect last days light. Backflip over a 15 jump. Sick.

We had our shots, but one thing I was missing. I really wanted to get the crew up on the Etna Volcano to ride the black and powder-like deep ash slopes. Last day and only a few hours time to do it. We got up early, and tried to get into the cable car. But it was tourist rush hour. We had to wait for two hours… Markus was already really nervous because we had to drive to Palermo as well this day to catch our ferry back home. We managed to climb the mountain while the wind was blowing like hell. But there we stood, on top of an endless black ash powder field. Its very different to anything else you know on a bike. high speed, no brakes and carving like on skis. That was the best moment of this trip – and the best moment to go home. It could not get any better. Big smiles on our faces. Good times and memories for life. One of the best trips ever. 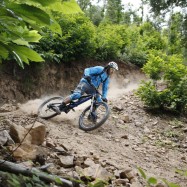 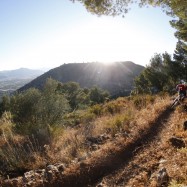 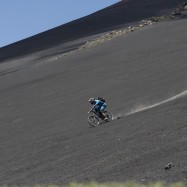 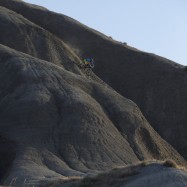 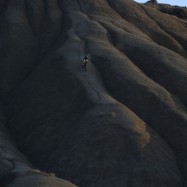 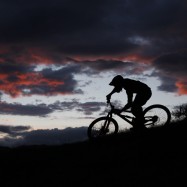